Get discovered by employers. Create your
job seeker profile and resume today!

Three Best Opportunities for Jobs in the Green Energy Sector 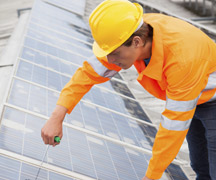 The U.S. Bureau of Labor Statistics defines a green job as one that produces goods or provides services that benefit the environment or conserve natural resources. Employees involved in green jobs typically have duties that make their workplace more environmentally friendly. That's a broad definition that covers everything from school teachers and architects to interior designers and restaurant owners.

While you can always forge your own path to a green career, check out the three top-growing industries expected to increase hiring in 2014 to jumpstart your search.

Jobs in the solar energy industry are hot right now. Regardless of whether you're looking to engineer the next solar innovation or want to land a construction job, it has never been easier to find a job in this sector. According to The Solar Foundation's National Solar Jobs Census 2013, there are 142,698 solar jobs in America. This represents a 20% increase in employment opportunities from 2012. The foundation also predicts that the industry will continue to see growth in the next 12 months, with 45% of solar companies expected to add jobs in 2014.

The best place to start your solar energy career is in California. The state is leading the nation in solar jobs, with more than 47,000 employed by the industry. The Solar Foundation predicts California's solar sector will continue to grow in 2014, adding another 10,500 jobs.

Although Texas is currently ranked sixth for solar employment, the state is a promising up-and-comer for job seekers. In 2013, Texas had 4,100 solar jobs—a 28% increase over 2012—and the state is poised to see a big boom in solar energy growth in the next year. That's because a number of utilities and private companies have announced plans to construct massive solar energy systems and sell renewable power in Texas' competitive energy market.

Two new bills passed Congress in August 2013 could help add up to 60 gigawatts of clean energy to the grid. One of the bills will allow for the construction of new hydroelectric dams on government property. The other will allow companies to add generation elements to the 80,000 untapped dams in the United States.

This growth is going to provide ample opportunities for job seekers, but even without it, there will be more hydroelectric jobs available in the next few years. According to the National Hydropower Association, 25% to 50% of hydroelectric workers will retire in the next five years, providing more job opportunities for those with technology, engineering and management experience.

Although most people think of renewable energy projects when it comes to green jobs, there are a number of green opportunities in the technology sector. In fact, one could argue that it was actually innovators in the technology field who launched the green energy industry into what it is today.

Electric cars wouldn't be in existence without the designers or engineers who are passionate about creating more efficient vehicles. Popular apps and other online tools that help you minimize your carbon footprint and maximize your energy savings wouldn't be possible without the work of eco-friendly developers. Even appliance companies, such as LG and Samsung, are now looking beyond ENERGY STAR certification to make their devices more energy efficient with home automation features.

Because of the reliance on green technology across every industry, it's not difficult to find a job that marries environmental impact with technology. Regardless of whether you want to work in the renewable energy field or prefer to invent your own creative energy solutions, there are plenty of employment opportunities available to you.

ASME helps the global engineering community develop solutions to real world challenges. Founded in 1880 as the American Society of Mechanical Engineers, ASME is a not-for-profit professional organization that enables collaboration, knowledge sharing and skill development across all engineering disciplines, while promoting the vital role of the engineer in society.

PennEnergyJOBS is the Energy industry’s most powerful online recruitment tool. Dedicated to serving the global employment needs of Petroleum, Power and Utility employers. PennEnergyJOBS has an unprecedented and demonstrated ability of targeting the coveted passive job seekers within the energy industry.

Electrical Jobs Today is dedicated to bringing together the Electrical job openings of the nation and the candidates specifically looking for them.  The entire focus is on Electrical jobs in the construction and energy industries; this means jobs posted on this site will only attract the most relevant candidates.

Thousands of jobs from a variety of niches.

The Best Jobs and How to Get Them

The cutting-edge book that finds you the best jobs & highest incomes.